Salò – A Response to Simon Hobbs​

As Simon Hobb’s excellent essay points out, the BFI has had a long history with the films of Pier Paolo Pasolini, not just Salò but most of his other feature-length works, shown in seasons at the BFI Southbank, released theatrically and on VHS or DVD. Pasolini is one of the most endlessly fascinating auteurs in film history, not least because his films are almost without exception ‘uneasy’ viewing and in particular Salò which remains a notorious landmark of cinematic extremity, despite having since been outstripped in terms of explicit, sadistic or abject onscreen content.

The BFI is the UK’s lead organisation for film, its activities dating back to the 1930s when it established a film distribution library in order to retain 35mm prints of notable titles which would otherwise be lost in the industrial churn of distribution, recycled for silver nitrate. The cinematic canon began to emerge through repertory exhibition by film societies in University towns and the critical writing that evolved around this relatively new art form. Specialist distribution companies imported foreign-language films to feed the film societies, and further to the early enthusiasm for the giants of the German and Russian silent eras, audiences comprised of students and the intelligentsia had a particular appetite for the political cinema of the 1960s-70s.

But the audience for purely political cinema is niche, as was demonstrated by the fate of the collectively run socialist exhibitor The Other Cinema in central London in the mid-1970s. No distributor or film outlet can financially survive on political cinema or the academic market alone, so needs to work with not only a range of material but also to maximise the audience for ‘arthouse’ films with content that reaches across different genres or modes of address, notably politics and sex. Unlike politics, ‘sex sells’ in a crowded marketplace, and while the theatrical cinema audience for sexually explicit content has shrivelled, the home video market has swelled enormously with the rise of the format. And it should be noted that one of the roles of the BFI’s video department is to achieve substantial finance targets, because the organisation is insufficiently subsidised to exist without its commercial income streams.

In preparing a new DVD release of a previously available title, distributors look at how to refresh the offering and surpass previous versions to give existing customers something different, in addition to appealing to new audiences. When the BFI remastered Salò to HD our video team reviewed the content of the package and decided on the inclusion of a number of new elements that would also distinguish this BFI edition from the US label Criterion’s release, as any other English subtitled version of the film presents competition in a global marketplace. The booklet, on-disc additionality and the sleeve are all areas in which to create a point of difference in line with the BFI’s mission to enrich the viewing experience by providing a deeper breadth of understanding and knowledge about the feature.

Produced within a fixed budget and time frame, BFI video publications are intended to be accessible not just to academics but to a wider market. ‘Special editions’ aim to add extra value to the publication, but it should be noted that both popular culture and art films may be afforded special editions as part of the sales strategy. (Although market research shows both that DVD additionality may influence a consumer’s decision to purchase a particular release, but also that the majority of additionality is not watched or read). 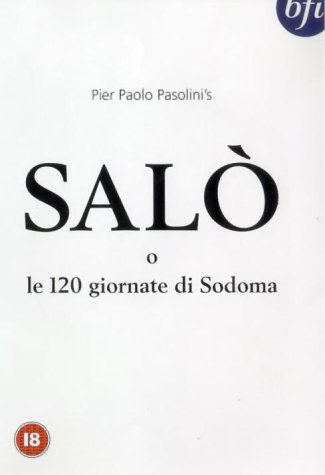 Arthouse advertising and the assured text: the cover art for the original BFI release of Salò
The BFI’s previous DVD cover for Salò was simply the name of the film and its director, black text on a white background. It assumed and relied upon existing knowledge. But since that release, the BFI’s marketing department had introduced corporate branding guidelines which insisted on a particular font (Caecilia) for the film’s title and the use of a film still, not original artwork or solely text, and the prominence of the BFI’s logo. In creating a visual identity for the new publication of Salò within BFI guidelines, we chose to adapt a previous BFI theatrical poster for the film, depicting naked women leashed and howling. The director’s name and the film’s title (in Caecilia font) run centrally across the image so not to obscure the women’s faces, nor to sit below the line of DVD racking. This striking image had the benefit of previous approval and was familiar to audiences, while being new to the DVD market. It also contrasted with the more passive and inwardly despairing tone of Criterion’s 2008 DVD sleeve, which also depicts a naked woman. Are either the BFI or Criterion video sleeves ‘pornographic’, as Simon Hobbs claims, and has any poor sap been tricked into buying Salò thinking it’s a porn film? I doubt it.

​Video back cover blurbs have to grab the consumer’s attention and quickly state the main rationale for buying this particular release. Shouting about the censorship of Salò implies in shorthand a complicated and intriguing film history, and enables us to turn a negative into a positive. There is more room within the booklet for writing about the film’s production, release and critical response. Simon Hobbs praises Sam Rohdie’s essay for providing ‘a framework of cultural validation which is absent from the cover sleeve’ but seems less comfortable with the more subjective and personal responses to Salò by Gideon Bachmann and Gilbert Adair. BFI video publications work with both a range of contemporary writers and historical documents, but it is true to say that in aiming for wider access than to just an academic market our preferred tone of address tends to be less objective and more expressive in its reading of the film.

In summary, the BFI video label rarely publishes straightforward films, and Salò is particularly complex, but using a plain brown paper bag as a cover would not make it any easier to read.
DOWNLOAD ARTICLE