Hammer Has Risen From The Grave A.D. 2012 Conference Report 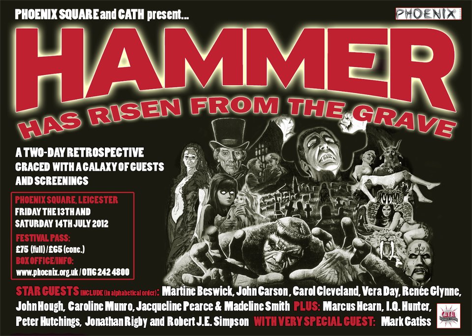 Introduction
Hammer is perhaps the most iconic of British film companies, making household names of Christopher Lee and Peter Cushing and exporting a quintessentially British brand of gothic horror around the world. The two day festival in Leicester’s Phoenix Square cinema  ‘Hammer Has Risen From the Grave’ - celebrated the company’s collaboration with De Montfort University and brought together an impressive array of contributors from Hammer’s past and present. Directors, producers and stars shared the stage with academics and historians to discuss the films and Hammer’s lasting impact on film production in the UK and internationally.

The festival, served both as a retrospective and a launch event to celebrate De Montfort’s Cinema And Television History (CATH) Research Centre custodianship of an impressive archive of film scripts, with money generated devoted to creating a PhD studentship to investigate the Hammer script archive and a further collection, The Jimmy Sangster Collection, kindly donated by his widow Mary Peach. The archive, once catalogued and curated, will be made publically available in a digital form for scholarly study.

Four festival strands were on offer: ‘Early Hammer’, ‘Bloodsucking’, ‘Science Fiction and Fantasy’ and ‘Forty Years Ago’, each designed to show the breadth of Hammer’s output, and particularly, the two decades before the company became associated with the horror film and, with the sci-fi output of the 1950s and 60s, the range of often neglected films in the Hammer canon. Of course, there was no intention of passing over the importance of its most iconic figure – the vampire – nor of failing to commemorate the company’s attempts to adapt its gothic formula to a new age of sexual permissiveness.

The screenings featured introductions followed by Q & A sessions from prestigious guests such as ‘Hammer Glamour’ (2009) cover girl Madeline Smith, horror and sci-fi staple starlet Caroline Munro (Demons of the Mind (1972) and Virginia Wetherell - star and wife to the Hammer regular Ralph Bates. Also present at the event were the Captain Kronos- Vampire Hunter (1974) star John Carson and the Twins of Evil (1971) director John Hough, as well as the scriptwriter and director Brian Clemens, and continuity supervisor Renée Glynne.

Alternate screenings were offered if the main feature did not appeal and the festival’s eclectic mix of Hammer history ensured something for everyone. Viewing the films, which many of us, myself included, have only seen as reruns on late night TV and subsequent video releases, in their intended cinematic form was fantastic.

The festival began appropriately at the beginning of Hammer’s long and colourful history, and after an overview of the conference from organiser Professor Steve Chibnall, Robert J.E. Simpson, the official Hammer archivist introduced Exclusive Films, parent company and distribution arm to Hammer, whose relationship continues in Hammer’s current incarnation. The insight into Hammer’s early years was fascinating, documenting the company’s many and varied business ventures from jewellers to hairdressers!

Early Hammer: Social Problems and the Supernatural
Simpson’s contribution was followed in the Early Hammer strand  by a screening of River Patrol (1948), as far removed from Hammer’s later output as is possible; dealing with the problems faced by smugglers in ration-era London when river policemen go undercover as a husband and wife to expose the smuggling ring. River Patrol demonstrated eloquently that Hammer’s output was larger than the gothic and macabre. For those in denial about the diversity of Hammer’s output and for those with insatiable horror appetites, there was a concurrent screening of documentary The Legend of Hammer: Vampires, charting the development of the vampire cycle and featuring interviews with Jimmy Sangster.

Peter Hutchings of Northumbria University introduced the Science Fiction and Fantasy strand. Hutchings is the well-known author of Hammer and Beyond: The British Horror Film (1993) and Terence Fisher (British Film Makers) covering the career of the director most closely associated with Hammer’s aesthetic, and particularly instrumental in creating the Hammer brand we think of today. Hutchings focussed on the Hammer science fiction films as a prelude to the screening Quatermass II (1957).

Friday closed with a screening of the beautifully restored The Plague of the Zombies (1966) introduced by John Carson and official Hammer historian Marcus Hearn, who has published extensively on the company.

As scriptwriter for numerous Hammer productions  including Captain Kronos and Dr Jekyll and Sister Hyde (1971) which were screened at the festival, surprise guest Brian Clemens was a welcome addition to the proceedings on Saturday. Clemens revealed that Dr Jekyll and Sister Hyde started as a joke to Hammer executives; asked if he would like to meet to develop the ‘joke’ the following week, Clemens was stunned to find the completed artwork adorning the elevator, promoting the film he had yet to write!

Clemens also directed Kronos, and shared the festival stage with two of its co-stars Caroline Munro and John Carson. Kronos had been envisaged as the means by which Hammer could resurrect and serialise the vampire but unfortunately, following the release of The Exorcist in the previous year, appeared way too quaint and parochial to achieve any commercial success. Munro lamented that her time with Hammer didn’t afford her the opportunity to play that most archetypal of Hammer villains, the vampire. She was approached to play Vampirella, an adaptation of Forrest J Ackerman’s 70’s comic book, but refused due to the nudity required of the role: female nudity being a key characteristic of Hammer’s later output.

When Hammer Ruled the Earth
Day two of the event began with an introduction by Ian Hunter: his paper, ‘Dinosaurs and Fur Bikinis: Hammer’s Fantasy World’  focussed on Hammer’s short-lived prehistoric output beginning with One Million Years B.C (1966), the often forgotten, Slave Girls (1967), When Dinosaurs Ruled the Earth (1970) and Creatures the World Forgot (1971). Slave Girls (AKA Prehistoric Women), was written and directed by Michael Carreras, demonstrating an ingenuity of economy, Slave Girls was produced using sets and costumes left over One Million Years BC a film produced on a considerably larger budget. Hammer famously recycled the sets and actors: Dracula Prince of Darkness (1966), Rasputin the Mad Monk (1966) were filmed back to back; The Reptile (1966) and The Plague of the Zombies (1966) followed the same resourceful and thrifty formula.

Perhaps Slave Girls deserves its largely forgotten status, but I would recommend  it for laughs alone. Its star Martine Beswick was on hand to discuss the production and was very good spirited about both the film’s reception and its status as a camp classic, admitting that she has her own 35mm print which she screens for friends whenever life is feeling a little dull!

Twins of Evil (1971) saw star Damien Thomas, reunited with director John Hough, with Hough describing his failed attempts in the acquisition of Hammer in the 1980s. Hough had partnered with Egyptian millionaire Mohamed Al-Fayed in a bid to buy the company from producer Roy Skeggs who pioneered The Hammer House of Horror series in the early 80s, in a last-ditch attempt to save the ailing company from receivership. Hough regretted that his attempts had not succeeded but was pleased to see Hammer reinvigorated for a new generation.

The highlight for many came on Saturday night, with the premiere of an HD restoration of the seminal The Curse of Frankenstein (1957). The film was preceded by an entertaining discussion between The League of Gentlemen’s Mark Gatiss and critic, broadcaster and author Jonathan Rigby. Gatiss, fresh from his  television series A History of Horror, exploring Hammer’s legacy and Rigby whose latest book, Studies in Terror: Landmarks of Horror (2011), which scrutinises the achievements of Hammer in the 1960s. Gatiss and Rigby’s recollections of Jimmy Sangster were particularly enlightening, illustrating, in the case of Dracula (1958), his reluctance to accept that he had created a legacy worthy of investigation some 50 years after the fact.

Nic Ransome from Exclusive Media also gave a brief intro explaining some of the difficulties faced when restoring a film of this age from colour grading to aspect ratio. Previous versions of the film followed a pan and scan approach, effectively giving the print a widescreen appearance whilst cropping the intended frame. Ransome was acutely aware that the audience may be expecting a widescreen print but despite his trepidation, the film looks and sounds remarkable. The film is due for release in a three-disc Blu ray/DVD double play edition in October.

Saturday night also saw final bids taken for the auction which featured donated memorabilia, including a model of Ingrid Pitt and an original painting of Cushing and Lee, donated by arguably the country’s most prolific genre movie poster artist Graham Humphries, responsible for a range of works from A Nightmare on Elm St to The Evil Dead.

The memorabilia stands proved successful, with Hammer themselves recognising the value in the associated product lines that often accompany genre releases, reprinting key movie posters from their catalogue, releasing authorised busts of Lee, Cushing and Pitt and with a line of official Hammer retrospective books already on the shelves, Hammer’s attention to detail when dealing with the legacy seemed appreciated.

Current Trends, Future Fears
The July/August issue of The Dark Side: The Magazine of the Macabre and Fantastic is an issue dedicated to Hammer, and features an insightful interview with CEO and president of Hammer films Simon Oakes. Oakes discusses Roy Skegg’s role as  producer and former head of Hammer and his attempts to resurrect the brand which ran into difficulties when he found the rights to much of the back catalogue owned by the Hollywood majors who had funded the larger Hammer productions. Oakes believes the leverage afforded by the success of new Hammer productions like The Woman in Black (2012) - the most commercially successful film Hammer have ever produced - convinced the majors to relax their control on the back catalogue to enable a process of restoration, re-release and the arduous task of rebuilding the brand.

Hammer is a brand, lastingly associated with the horror genre, and operating with a keen eye on commercial imperatives. Along the way the company created great art, not all of the time, but enough to ensure its place in history. The Hammer company has fully embraced resurrection:  not only restoring significant titles from the back catalogue but with their sixth film in production they are committed to making Hammer a name that both evokes nostalgia in their older fans and reaches a commercially viable generation who never benefitted from the Hammer reruns on TV.  Like many, I romanticised original Hammer and came to the festival believing that new Hammer simply bought into a brand, a brand that I felt couldn’t function without the artisans they had in Fisher, Hinds and Carreras et al. The insight the festival gave into Hammer’s production processes went some way to alleviating my misgivings about this new variant. Hammer never represented one director’s vision or one screenwriter’s vision; the films were produced on a budget with the intent of entertaining and being profitable for the company. In this regard new Hammer is not the usurper but is the continuation of a great institution. This two day festival saw screenings of restorations, Plague of the Zombies and Hammer’s career defining The Curse of Frankenstein, and with plans to restore a further twenty eight of the company’s classics; Hammer’s legacy would appear to be in safe hands.

It’s going to be interesting to watch and see if Hammer has indeed risen from the grave.